A Dimension ÄRM that Alan used to train Ginta, Snow, Jack and Dorothy. It puts people at the user's will inside this gate, where time slows to 1/60th of its outside time and with many challenges programmed within it, the dimension serves good training ground.

The drawback to using this ÄRM is that the user cannot close the Gate prematurely, or else those inside will be stuck in the other space forever. Snow explains this in Episode 11. 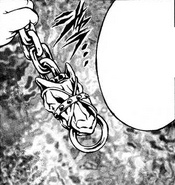 The Training Gate chain
Add a photo to this gallery

Gaira also has one of these, and is able to open 6 gates simultaneously. He does this during the War Games between the First and Second Battle to train Ginta and Jack some fighting skills. He does this again to allow the above five minus Snow plus Nanashi and Alviss to train.

Retrieved from "https://mar.fandom.com/wiki/Training_Gate?oldid=8925"
Community content is available under CC-BY-SA unless otherwise noted.