Trivia: In episode 2 of the anime, and chapter 4 of the manga, Leo's ÄRM breaks. The guess is that because Dorothy is from Kaldea she repaired it, or she has multiple Leo ÄRM's at her disposal. 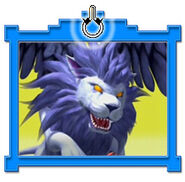 Add a photo to this gallery
Retrieved from "https://mar.fandom.com/wiki/Flying_Leo?oldid=8593"
Community content is available under CC-BY-SA unless otherwise noted.