Chaton is the name of a character in MÄR. A kitty girl and the strongest of the Level 1 Bishops of the Chess Pieces which her power were on par to the lowest Knight. Chaton is voiced by Miyu Matsuki in the Japanese Version.

Chaton's friends are Loco and Ian. Though Loco becomes annoyed at Chaton due to the fact Chaton overcares about her.

Chaton first appears in the 6th Round of the War Games and Alan was surprised at her appearance when she removed her hooded robe. She quickly manages to defeat Alan (who mistook her for a Knight before the battle began) due to his Cat phobia which he inherited from Edward the Dog. During Halloween and Alan's battle, Chaton and Loco kept arguing over who would win while watching from a castle balcony. During Phantom and Ginta Toramizu's battle, after Ginta's Puss in Boots was introduced, Chaton commented that it is "the greatest Guardian ever", making her the only one who took it seriously. Of course, it's likely due to that she is fond of cats.

Flashes of her are seen in episode 62 when the group encounters Alan working as a detective when he is mauled by cats in the street, as well as when he defends himself against Dorothy and Ginta. 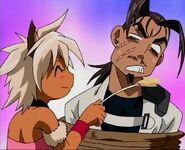 In the anime, after the War Games are completed, she and Loco, while traveling through the desert, get captured by the Ghost Chess along with Team MÄR. Working together, all of them escape the Ghost Chess, although due to Loco's constant use of Darkness ÄRM Loco is reverted back into a baby. Chaton is quick to begin taking care of Loco, and later watches the death of Alan to King, much to her horror. During Alan's last moments, he gives Chaton his earring and she seeks out other Chess Piece members and interrogates them on King's current location. After King is defeated, Chaton lives together with Alan and Babbo, who help take care of Loco.

Chaton is always happy, almost to an annoying level, which makes you wonder why she joined the Chess. She has a crush on Alan, much to his distaste, as Alan who was ridiculously in contrast to his looks and due to an ironic twist of his situation with Ed, is a cat phobic. She is good friends with Loco, even though Chaton is quick to get on Loco's nerves.

Retrieved from "https://mar.fandom.com/wiki/Chaton?oldid=9115"
Community content is available under CC-BY-SA unless otherwise noted.