Babbo is Ginta Toramizu's ÄRM and the only ÄRM with a human soul. The name is Italian for 'daddy'. He was voiced by Banjō Ginga in the Japanese Dub and Keith Silverstein in the English Dub.

Babbo has the appearance of a giant metal kendama. On the side of the hammer there is a design of a cross surrounded by four holes that can be filled with magic stones on both sides of the kendama. The ball is where Babbo's face is. He has a long, thick cylindrical nose with a thick, dark mustache underneath. Besides that he also has thick, dark eyebrows and a soul patch.

Babbo is known for his oversized ego and love of himself, constantly referring to himself as an "elder" (in the English versions, a gentleman), comically in contrast to his typical shape, which is in default form an oversized kendama.

This unique ÄRM was created in the magic kingdom of Caldia many years ago. At some point an Elder of Caldia had his soul downloaded into Babbo, which gave him his sentience.

When Phantom and Diana deserted Caldia with Caldia's Orb they stole many ÄRMs which included Babbo. Then the consciousnesses of Caldia's Orb was transferred into Babbo and began fighting together with Phantom with the purpose of conquering MÄR-Heaven. They met resistance against the Cross Guard and fought against them in the War Games. There Phantom fought Danna which resulted in a tie.

After this fight Babbo was confiscated from the battlefield by Alan while Phantom's own allies removed Babbo's magic stones. Alan sealed Babbo inside a chest in a cave that could only be accessed by those without magic.

Prior to the First War Games, Babbo was an elder who resided in Kaldea.

This is the main plot of the first MAR manga and anime.

Ever since the 2nd war concluded, he has been traveling around searching for Ginta, and ended up sleeping in a lake until Kai wakes him up. Babbo has no magic stone inserted, so he cannot transform into his previous versions. However, Babbo has new versions:

Babbo possesses the unique ability to download the souls and personalities of others into himself. This is what gives Babbo his sentience and what makes him differ from other ÄRMs.

In his base form the typical way of attacking is by swinging the weighted chain and throwing Babbo at an opponent. When the user gets into a close range he can use the hammer for a physical attack.

Besides attacking this form also has its own unique abilities. The chain connected the ball to the hammer is capable of increasing in length so the user can attack enemies from a distance and when not attacking the chain can be shortened so as not to interfere with the users mobility. The hammer can also change sizes from being smaller enough to resemble a normal sized hammer to growing and becoming large enough to rest on one's shoulder. The ball with Babbo's face can also rapidly increase in size, growing to be as large and heavy as a house.

Babbo can be used for many unique ways of attacking by accessing his many different versions. However, these versions cannot be accessed without the Magic Stones that are attributed to them. To create these versions data is recorded from the users imagination. In total there are eight spots for Magic Stones, four on each side.

For Version 1 A: Hammer ÄRM Babbo becomes a gauntlet over the user's hand with a metal ball at the end. The base of the gauntlet has the same design as seen on the hammer of Babbo's normal form.

This is used for close-range fighting where a punch from this is strong enough to destroy one of Phantom's Guardian ÄRMs. In this form Babbo can also communicate telepathically with the user

Babbo Version 1 B: Dagger ÄRM is just an extension of Version 1 A. The base of the gauntlet remains the same while the metal ball disappears and in its place extends a long dagger.

Like the Version A this one is made for close-range fighting, but instead of the blunt attack from the metal ball this form is made for slashing. This form can too communicate telepathically with the user.

Babbo turns into a gun with which Ginta can fire exploding bubbles that look like Babbo. Ginta uses this for long range fighting or as a cover.

Babbo turns into a giant Gargoyle creature that levitates with a giant crystal as his lower waist and holds a ring in his mouth. He can use the ring to fire a strong beam that uses a lot of magical power . Because this version is a guardian ÄRM, Ginta can't move when he uses it, but it also is very dangerous; if he is reckless with it, Ginta's spirit energy will be crushed (he may also lose his sanity). It was first sighted in the underground lake defeating Girom, and blasting a way out for lost souls of an old ship to escape. Ginta used this form in the Gate of Training when he was in there with Snow. Ginta also used the form to send magical energy to Allan when Saturn placed a curse on him. Saturn used: Darkness ÄRM, Finsternis.

Babbo turns into an angelic female Holy ÄRM that uses healing magic, which is effective for counter-attack and protection against Darkness ÄRMs. Babbo becomes embarrassed after the transformation. Ginta first used this form in the battle with Kannochi. He attempts to use it to undo the curses placed on Ed/Alan and Alviss. It is successful for Ed and Alan but fails for Alviss. Nanashi and Jack think Alice is beautiful.

Babbo turns into a giant pudding that covers Ginta entirely and absorbs all physically destructive attacks used by the enemy. The one drawback is that this move will render Ginta motionless. He first used this ability during his second battle with Girom during the War Games.

Babbo turns into a giant Puss in Boots, gaining immense speed, four knives with one hidden knife in each boot and the ability to use other ÄRMs. He first uses this ability during his final fight with Phantom. It has the following ÄRM:

Mr. Replacer
Add a photo to this gallery

Ginta used this to merge his Dad's mind that was in Babbo back with his body. When used Babbo lit up and the two were merged.

Babbo transforms into an exact replica of the Gate Keeper Clown, allowing a certain number of people, determined by the dice roll of the Gate Keeper, to go into the real world from MÄR-Heaven. Ginta and his dad meet up with Koyuki and return home. 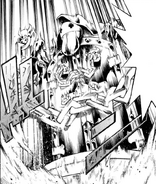 This is the same form of Version 3: Gargoyle but is made to get stronger with the hopes and dreams with every person in Mar-Heaven.

Babbo Version 8:Omega Gargoyle
Add a photo to this gallery

Retrieved from "https://mar.fandom.com/wiki/Babbo?oldid=9494"
Community content is available under CC-BY-SA unless otherwise noted.